The small town in the Harz Foreland played a pioneering role at the time of the Reformation. Its residents were among the first to adopt Luther’s teachings. A Lutheran preacher was called to the city as early as 1535. The beams of the half-timbered houses in Osterwieck bear the earliest Protestant inscriptions: short phrases, biblical quotations, psalms. The tradition was started by the mayor of the time, Michael Steggeler, who had the inscription "VDMIAE = Verbum Dominum Manet in Aeternum" ("But the word of the Lord endureth for ever") carved on his house.

Today, over forty of these inscriptions can still be found carved into the sill-beams and parapets of around 400 timber-framed houses located in the historic city centre. Osterwieck is also home of one of the very first Protestant churches, St. Stephan’s town church: Between 1552 and 1557, St. Stephan’s was rebuilt on the site where a previous nave had been demolished and was subsequently consecrated in the name of Protestant Christianity. This place of worship contains a more than 500-year-old Gothic altar as well as a number of epitaphs and plaques commemorating the town’s nobility and its wealthy burghers.

Things to see in Osterwieck

In Osterwieck, the houses speak to us. Not verbally - but if they could, they really would have a lot to tell. On a total of 43 houses in Osterwieck’s old town you can see house inscriptions from the time of the Reformer. However, they are not limited as they usually are to providing information on when the house was built but convey very clear messages.

Half-timbered buildings play an important role in Osterwieck. A total of 400 half-timbered houses are protected heritage buildings dating from the Late Gothic era and the Renaissance. The so-called "fan rosettes" can be seen here. On Osterwieck's “Alter Vogtei”, they are dated to the year 1533 and are thus likely to be the oldest surviving fan rosettes, according to current research.

However, the house inscriptions are much more interesting than the architectural style of the buildings. In accordance with what was first passed down from Brunswick in 1530, as of 1533 the residents of Osterwieck also confessed their faith with Protestant mottoes, Bible quotations, psalms to the Protestant faith in Latin and German. This was actually quite impertinent towards their territorial lord, Cardinal Albrecht, who was not only the Bishop of Halberstadt but also Archbishop of Magdeburg and Archbishop and Prince Elector in Mainz. Time and again one finds "Verbum domini manet in aeternum" – in English: “the word of the Lord endureth forever" – which was the motto of the Schmalkaldic League of Protestant princes and cities, too. It is said that it was inscribed on a house at Schulzenstraße 9 for the first time in 1534. The naked boy with his head over a skull symbolises the “transience of earthly life” compared with the “eternity of the word of God”.

It even says, “He who fears the Lord has a secure fortress” and “>only< God's word is eternal” on Schützenstraße 2, which is an excellent example of the Osterwieck Reformation. The ornaments at the beginning and at the end of the text quotes are called magic knots and symbolise infinity.

House inscriptions are filigree carvings that have been either positively or negatively carved into the timber framework. Originally, they were not highlighted in colour, but were coated with oil to protect them and lived solely from the interplay of light and shade – as can be easily seen on the wooden panels of the "Alte Post" in Nicolaistraße 2, which has not yet been restored. Had there been no carvings here, but only paint, the almost 500-year old inscriptions would long have faded and would no longer be discernible.

On the house at Sonnenklee 40 you can read the following: "Cast your burden upon the Lord and He will sustain you;

He will never allow the righteous to be shaken., nor go to his seed for bread" (Ps. 37.25). "It is all in the blessing of God" (Luther's title of Psalm 127). The numerous inscriptions in German would not have been possible without Martin Luther’s translation of the Bible.

"The High House" at Nicolaistraße 30 has three floors and towers over its neighbours. On it is written the Bible saying, "The fear of the Lord delights the heart, and gives gladness and joy and long life." (Ecclesiasticus 1.12) and the popular proverb, "Do nothing unadvised and you won’t suffer afterwards”. 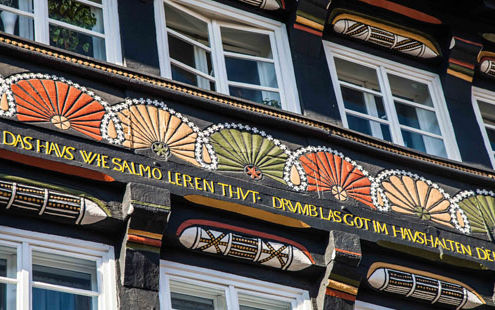 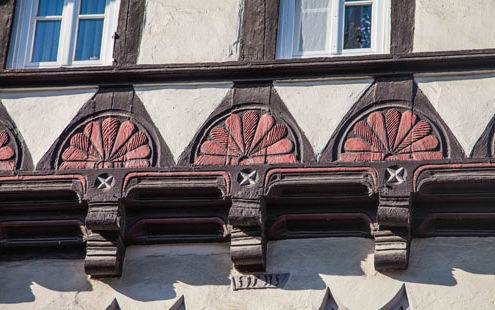 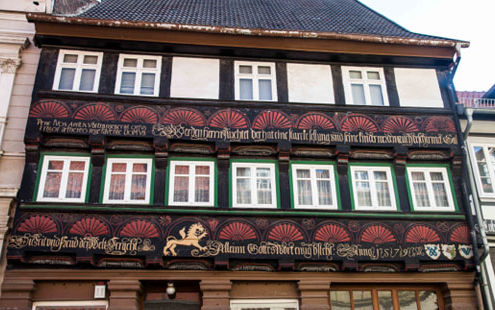 Liselotte Thiele and her late husband Dr Klaus Thiele spent many years researching these inscriptions. The couple were passionate advocates for the preservation and renovation of St. Stephen’s Church as well as numerous houses dating from the Reformation. The town of Osterwieck is deeply grateful for the commitment shown by the couple from Wolfenbüttel.