When Martin Luther was thirteen years old, he spent a year living in Magdeburg as a school pupil. From 1497 to 1498, Luther attended a school run by the Brethren of the Common Life ("Brüder vom gemeinsamen Leben"), a religious order which did not require its members to take vows. In 1524, Mayor Nicolaus Sturm summoned him to Magdeburg. As a result of the sermon Luther held on 26 June in St. John’s Church, part of the town council was inspired to follow the Reformation. Only a few days later, Catholic mass was abolished in Magdeburg, and a majority of parishes adopted the new Evangelical church services and church constitution. At first, only the Cathedral Chapter comprising the collegiate churches of St. Sebastian, St. Nicholas and St. Gangulphus, and the Franciscan, Dominican and Premonstratensian monasteries remained Catholic.

In 1563, even the archbishop himself had adopted Luther’s teachings. In 1567, the first Evangelical church service was held in the Cathedral. Luther sent Nicolaus von Amsdorf to become the first superintendent of Magdeburg. Amsdorf set up a town school in the former Augustinian monastery. The reform of the school system was one of the most urgent tasks of the era. At that time, Magdeburg was considered the bastion of German Protestantism.

Magdeburg, the state capital of Saxony-Anhalt, is a rewarding destination for a tour through German history; a Romanesque and Gothic city of art and culture. To this day, 26 June continues to be celebrated as the day that Reformation was introduced into Magdeburg. A memorial in front of St. John’s Church, erected by the famed sculptor Emil Hundrieser in 1886, commemorates Luther's legacy in the city. Visitors to Magdeburg Cathedral can view a box in which indulgences, issued during the time of the Dominican monk, Johann Tetzel, were stored.

The town guide Marianne Kirchner plays the part of Katharina von Bora and has a good few things to say about “her Martin” in the short film. (German)

Things to see in Magdeburg

Magdeburg Cathedral was the first Gothic building erected in Germany and was considered as the greatest sacral building before the completion of Cologne Cathedral. Its origins date back to the year 937, when Otto I. set up a monastery in honour of St. Maurice; he extended the church from 955 and had it established as a cathedral (seat of the ecclesiastical arch bishop) in 968.

Otto endowed his cathedral with ancient treasures, which he brought from northern Italy to Germany. After Emperor Otto died in Memleben in 973, he was laid to rest in the cathedral in Magdeburg. In 1207, the Ottonian cathedral was very severely destroyed in a town fire. Archbishop Albrecht II decided to erect a modern new building for his parish.

If you take a city break or a cultural family trip to Magdeburg and go to visit the cathedral, you will experience a monumental, surprisingly bright, impressive space, comprising unique original features of international renown dating from almost all artistic eras, including the original burial site of Emperor Otto I and his first wife Editha, Romanesque bronze memorial plates, and the famous portal figures of the clever and stupid virgins.

April and October
daily 10am - 5pm

November to March
daily 10am - 5pm

On Sundays and religious holidays after 11.30am 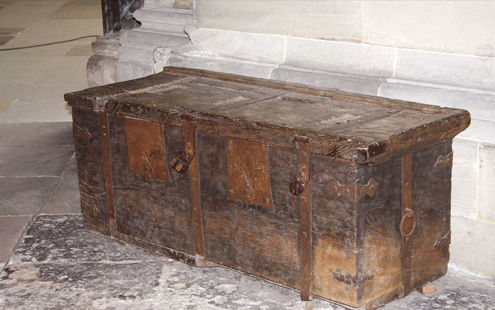 Tetzelkasten in Cathedral of St. Maurice and St. Catherine

The Cathedral has a so-called “Tetzelkasten” or Tetzel box. In 1517, the Dominican monk Johannes Tetzel pronounced by order of Cardinal Albrecht St. Peter’s indulgence for the erection of the Papal church in Rome. He collected the money of the believers in the box, who would allegedly thus be able to buy themselves free of their sins. He collected with the motto “As soon as the money in the coffer rings, the soul from the purgatory's fire springs”. The excesses of the trade in salvation for the soul incensed Luther. He was appalled and felt challenged to formulate his radical critique of the Roman Catholic church: He published his 95 Theses against the sale of indulgences. That was the beginning of the Reformation.

Public tours of the Cathedral
November to April daily 2pm
Sunday also 11.30am
3,50 Euro per person

Tours by night
Every two weeks from September to April
Friday at 10pm
4,00 Euro per person

on Sundays andreligious holidays at 10am

Traces of Martin Luther and the family of Otto von Guericke can still be found in Magdeburg’s oldest parish church. However, the church is mainly used today as a location for conferences and events. St. John’s has had a chequered history. The church was built in 1131 as a three-aisled cruciform basilica in the Romanesque style.

It was rebuilt time and again after being destroyed in various town fires and after the siege by General Tilly’s troops in 1631. On 16 January 1945, the church was almost completely ruined by a bombing attack. It was not until 46 years later, on 16 January 1991, that reconstruction began on the initiative of an advisory board; reconstruction was completed in 1999. St. John’s Church is closely associated with a far-reaching event. On 26 June 1524, in the completely overcrowded church, Martin Luther held a sermon on true and false justice. It was after this sermon that the old city of Magdeburg unanimously converted to Protestantism. The Luther monument in front of the church, which was erected in 1886, reminds us of his visits to the city.

Nowadays, St. John’s Church is once again open to the public and is a known as an exceptional location for events. The viewing platform offers visitors a fantastic panorama view over Magdeburg, City of Otto. 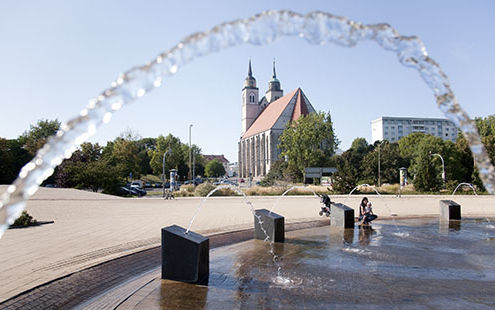 On 24 June 1524, Luther held a sermon in the Walloon church which, up until 1680, was the monastery church of St. Augustine. As a large crowd had come to hear this sermon, it was held again two days later in St. John’s. Just a few weeks later, on 17 July 1524, almost all churches in the city of Magdeburg converted to Lutherism and Catholic mass was abandoned. Magdeburg thus became a bastion for Protestantism, radiating well beyond the city’s boundaries, and was given the epithet “the pulpit of our Lord”.

In a privilege dating from 25 May 1689, Brandenburg’s prince-elector, Friedrich III, donated Magdeburg’s deserted St. Augustine’s Church to the Walloon-Reformed congregation who had fled from Mannheim. In 1694, after extensive renovation work, the church could be used once again. During World War II, the church was destroyed during an air-raid. Reconstruction work began in 1967 and in 2015 the Evangelical-Reformed parish’s new parish centre in the nave was ready for use. The high choir is used today by the Evangelical old town congregation. In the nave there are exhibits from the churches which were demolished in Magdeburg between 1956 and 1965, such as the Telemann bell, cast in 1683 by Magdeburg’s bell founder, Jacob Wentzel.

The Walloon church can usually be visited during the day in Summer. 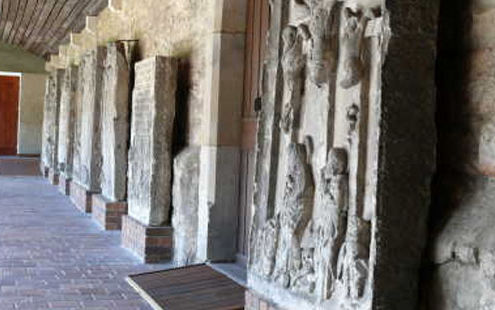 ART MUSEUM IN THE "MONASTERY OF OUR LADY"

A visit to the Art Museum in the Monastery of Our Lady is a highlight of any cultural trip or weekend break to Magdeburg, as it is considered the most important site of contemporary art and sculpture in Saxony-Anhalt. The museum’s rooms are in a Romanesque monastery which was built in the 11th and 12th centuries.

The monastery is thus the oldest remaining building in Magdeburg and is on the “Romanesque Road”. The museum was opened in 1974. Its collection includes a considerable number of 20th century sculptures but also works dating from the ancient world, the Middle Ages and Modernism. The varying special exhibitions either address selected topics relating to international contemporary art or provide insight into the work of trend-setting contemporary artists. 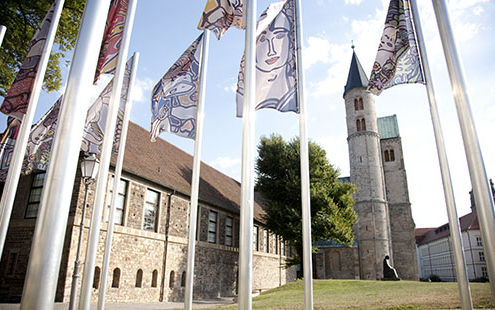 Magdeburg’s Art Museum and Monastery of Our Lady

With its large mediaeval exhibitions, Magdeburg’s Museum of Cultural History has made a name for itself far beyond the borders of Saxony-Anhalt. It is a magnet for those interested in culture visiting Magdeburg for a city trip or a short break.

The building was built in accordance with the drafts of the Viennese architect Friedrich Ohmann with stylistic elements from the Renaissance and Gothic eras and was opened in 1906. The task of the museum is  the same today as it was then: it deals with the art and cultural history of Magdeburg and places it in a broader European context. The art collection comprises paintings from the 15th to the 20th century, textiles, precious tapestries from Flanders, furniture from various centuries, ceramics and a few special collections.

The statue of the Magdeburg Horseman in one of the city’s most beautiful rooms is especially worth a visit. It can be found in the Museum of Cultural History’s Emperor Otto room, which has a mediaeval feel to it; it is the oldest free-standing equestrian statue north of the Alps. The Magdeburg Horseman dates from about 1240. In the permanent exhibition, “Magdeburg – the City’s History”, visitors can follow the tumultuous history of the city – from mediaeval metropolis to the state capital of Saxony-Anhalt.

Different exhibitions may have altered opening hours which can then be found on the website of the respective exhibition. 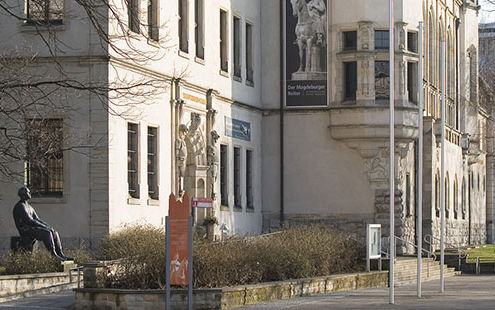 The city on the high bank of the river Elbe on the threshold of the North German lowlands has always been a focal point of German and European history. Original works of art and testimonials from the museum's collections tell the story of Magdeburg's fate.

THE GREEN CITADEL OF MAGDEBURG

One of Magdeburg’s most eye-catching visitor attractions is also one of the last architectural masterpieces designed by the artist Friedensreich Hundertwasser, and is located among the ensemble of Baroque façades and examples of modern design which make up Magdeburg’s city centre. The GREEN CITADEL OF MAGDEBURG was officially inaugurated in a special ceremony that took place on 3 October 2005. The eccentric artist and imaginative architect worked on the plans for his project in Magdeburg right up until shortly before his death in the year 2000. There was a heated debate over a long period of time before construction of the building designed by the Austrian artist and architect (1928 - 2000) could get underway. His plan foresaw an “oasis for humanity and nature within a sea of rational houses” at the heart of Magdeburg, which would contribute to art and culture.

As a building for commercial and residential use, THE GREEN CITADEL OF MAGDEBURG provides the residents of Magdeburg and its many visitors individual living space and a space to explore and experience. It includes, for example, 55 rental apartments, courtyards that are open to the public and surrounded by attractive shops, restaurants and cafés and a small hotel with 42 rooms. 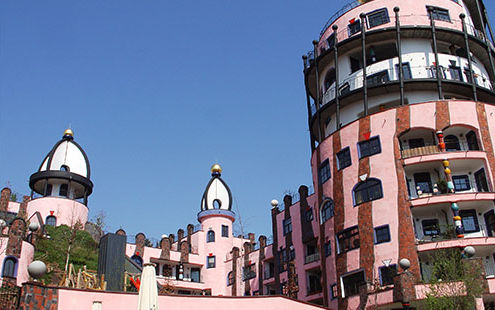 Back of the GREEN CITADEL OF MAGDEBURG

Meeting point: in the INFO in the large courtyard of the GREEN CITADEL OF MAGDEBURG

The Möllenvogtei Garden is slightly hidden behind walls and is in very close proximity to the Magdeburg Cathedral. The Garden has probably hardly changed since the Middle Ages and thus gives visitors the chance to visit an original, preserved part of Magdeburg as it was. This also includes the only remaining city gate to the Old Town of Magdeburg which dates from 1493. 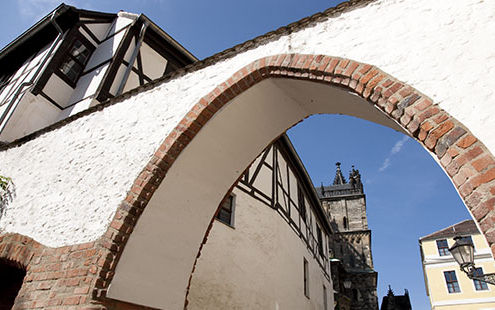