One of the most important landmarks for anyone who visits Mansfeld (either for its culture or just as a weekend getaway) is the former home of Luther’s parents, Hans and Margarethe Luder. The exhibition, ‘I am a child of Mansfeld’, details the family’s daily life, Luther’s experience at school and his childhood in general. The exhibition displays significant archaeological artefacts such as the marbles Luther once played with.

Luther’s parents’ house was extensively renovated in 2014 and a modern museum building was added. Archaeological excavations took place during the renovation. Hundreds of the objects found – like a cooking pot and a spigot – can now be viewed as part of the exhibition.

Only the foundations remain of what was once the first school Luther attended. Nevertheless, every year on the first Saturday after Easter, his enrolment is re-enacted and celebrated at the site. Today, Luther’s Well (Lutherbrunnen), which was constructed in 1913, commemorates the Reformer. Another visitor attraction is the Luther portrait dating from 1540, in St. George’s Church. It depicts Martin Luther in full regalia and is his only full-body portrait.

Mansfeld palace on top of the Burgberg near Mansfeld, which was once the fortress of the Counts of Mansfeld, is open to visitors.

A tip for all cultural tourists

The Tourist Information in Lutherstadt Eisleben and the town of Mansfeld offers short package deals to Martin Luther’s home town and have compiled interesting holiday arrangements for visitors.

More information can be found on the following website: www.lutherstaedte-eisleben-mansfeld.de.

Things to see in Mansfeld-Lutherstadt

A VISIT TO MANSFELD

It is a few minutes’ walk. But they are worth it. A narrow road leads west from the station at Klostermansfeld through the town – we recommend taking a detour to the Romanesque monastery church of St. Mary’s (Kirchstraße) and to the Lutherstein – and on to Mansfeld Castle (Mansfelder Straße). The road is lined left and right by fields and meadow orchards. Overgrown hillocks which bear witness to mediaeval mining rise between them. The Schlossberg where St. George slayed the dragon will soon be visible.

On arrival at Mansfeld Castle, you feel surrounded by former greatness and history. The castle grounds which have been preserved as well as such marvellous castle buildings as the count’s Abbey Church are impressive. Three castles were erected at the same time during the Reformation; they prompted Lucas Cranach the Younger to use them as the background for the apostle Paul’s conversion to Christianity. The conversion of Saul to Paul established Christianity as a world religion. In Mansfeld Castle, Christian traditions are juxtaposed in various different ways with the ups and downs of power and pomp. The café “Wächterstube” invites visitors to linger. It is home to a brief but significant exhibition about the history of the fortress and the castle. A trip to the mine is an absolute must. Two things become apparent: Why Mansfeld was formerly named Mansfeld Valley and why the inhabitants advertise their town as the “Gateway to the Harz”.

It is only a few minutes from the castle to the town. You either take the narrow footpath or stroll more comfortably along the asphalt road (an additional route goes via Ernststraße). When you reach the former Postplatz, you enter Lutherstaße and mentally traverse the old town wall. Martin Luther’s parents’ house is adjoining, the new museum is directly opposite. You can plunge into the life of the Luther family and feel at home, at the latest when the empty table has been filled with food which was typical of the meals eaten during fasting periods or festive day feasts.

You can now continue up Lutherstraße. Feeling just as Luther did when he was a child. Following in his footsteps past the dwelling of his school-friend Nicolaus Oemler to reach the school. Nowadays, you can find the location of the school in the town information board which is directly beside St. George’s Church. You should listen for the small bell when you are walking along. Today, it tolls the hour. It was consecrated in August 1497 together with the late Gothic Church of St. George.

Its interior can tell countless stories of the town’s inhabitants, tales of their desires and worries and stories about former economic prosperity. However, it was here that Luther’s voice resounded for the first time in the choir; he kneed here before the altars and prayed for his earthly childhood wishes to be fulfilled. New things have been sensitively included: Modern art stands for today’s appropriation of the dragon slayer, St. George, and the town’s great son, Martin Luther. An exhibition in the count’s lodge offers detail as well as an overall panorama.

Lutherstraße takes us further on to the Luther fountain which was erected in 1913. In contrast to the many heroic monuments of the 19th century, Luther has not been placed prophetically on a pedestal; on the contrary, the story of his origins and home town, his deeds and his character as a Reformer working in the tranquillity of his study are told. When he left his home town at 14 years of age, his motto was: “out into the world”. 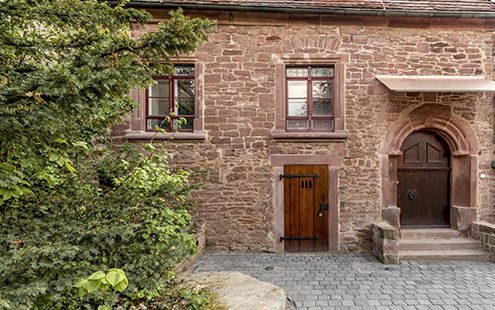 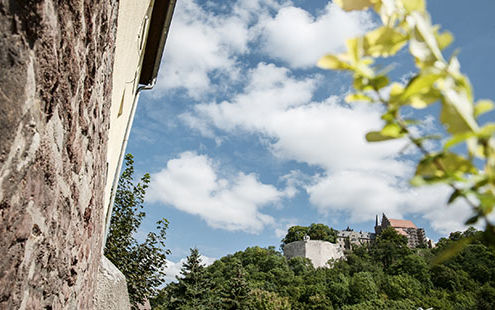 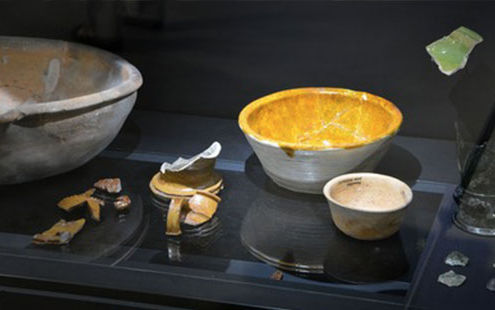 Mansfeld-Lutherstadt: The home of Luther's parents. Luther spent his childhood here.Mansfeld Castle in Mansfeld-LutherstadtIn the Museum of Martin Luther’s Childhood: Archaeological findings from a cesspit from Luther’s parents’ house: Fragments of earthenware beer steins, a yellow glazed bowl and a small dish.
Like us on facebook!Follow us on Twitter!Watch our videos on youtube!