Luther was born and died in Eisleben. Martin Luther was born here on 10 November 1483 as the first of nine children to his parents Hans and Margarete. The world-renowned Reformer also died here in 1546. At that time, Eisleben was the most important town in the county of Mansfeld, which had become prosperous and reputable due to the mining and smelting of copper shale. Luther’s father also earned his livelihood as a miner in Eisleben. A day after his birth, Luther was baptised “Martin” in the Church of St. Peter and Paul, not far from the home of his parents. Today, the church is a destination for thousands of tourists who visit Luther’s baptismal font, of which a reconstruction remains.

When Martin Luther was just one year old, the family moved to Mansfeld just a few kilometres away, where his father worked in the mining and metallurgy industry. We are also reminded of the Reformer in St. Andrew’s Church in the market square of Eisleben. It is here that Luther held his last four sermons and where he was laid out after his death. Luther died on 18 February 1546 while visiting Eisleben to settle a dispute between the counts of Mansfeld.

The exhibition “I come from here – Martin Luther and Eisleben” in Luther’s Birthplace recounts Luther’s origins and depicts life in the Middle Ages. The Luther family home has been recreated with historical furniture.

Martin Luther was baptised in the Gothic church of St. Peter and Paul on 11 November 1483. Today, the “Baptism Centre” offers themed tours, prayer meetings and school projects relating to the sacrament of baptism.

In the house where Luther died, the exhibition “Luther’s final journey” recounts the Reformer’s last trip to Eisleben and his final days there.

A monument to Luther in Eisleben’s market square commemorates the town’s most famous son.

The Cistercian convent of St. Mary’s of Helfta, one of the great centres of spiritual life in the Middle Ages, is also in Eisleben. Personalities such as Gertrude the Great, Mechthild of Magdeburg and Mechthild of Hackeborn symbolise the radiance and influence of the convent on 13th century mysticism and literature.

Other things to see in Lutherstadt Eisleben

A public museum for Luther pilgrims was already founded at the end of the 17th century. The house is therefore one of the oldest institutions of its kind in the German-speaking area. The birthplace was given its current appearance after being renovated after a town fire in 1689. The building underwent comprehensive renovation and extension between 2005 and 2007. The newly created ensemble has since received five architectural awards, thus becoming the building in Saxony-Anhalt with the most awards.

April to October:
Monday to Sunday 10am - 6pm

November to March:
Tuesday to Sunday 10am - 5pm 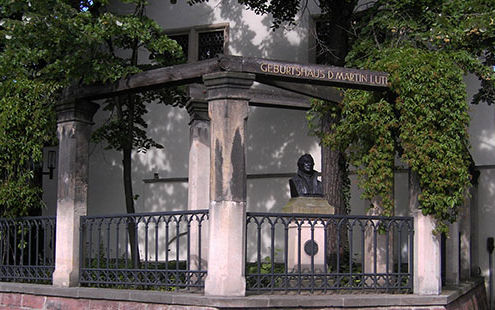 CURRENT EXHIBITION: I come from here – Martin Luther and Eisleben

The exhibition in Luther’s Birthplace traces the Luther family. Around 250 exhibits tell of the origins of the Reformer, the mining activity of his father, the piety and spirituality of the Middle Ages and of Luther’s baptism. It was the most important event linking Luther to Eisleben. A central exhibit is, therefore, the baptismal font dating from 1518. The family home has been recreated on the ground floor of the Birthplace. The exhibited furniture replicates historical models and was made using mediaeval tools. The so-called “Schöne Saal” on the top floor has been used since 1693 as a special place for worshipping Luther. Portraits of Luther, Melanchthon and the electors of Saxony are on display here.

Over 500 years ago,  the Reformer Martin Luther was baptised in St. Peter’s Church (10 November 1483) one day after he was born. The church in Eisleben has, by its own account, 15,000 visitors each year. In particular, the new baptismal font which is embedded in the ground has met with much approval. The “Baptism Centre” commemorates Luther but also encourages discussion and reflection on baptism today. 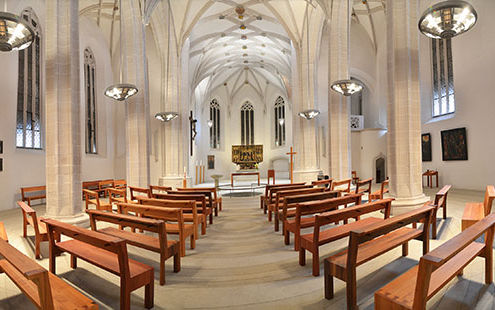 THE HOUSE WHERE LUTHER DIED

Luther’s death is commemorated today at the museum on Andreaskirchplatz 7. For a long time, it was assumed that the Reformer Martin Luther actually died here on 18 February 1546. However, more recent research has revealed that the house he actually died in stood on the market square, on the site currently occupied by the “Graf von Mansfeld” hotel. The house on Andreaskirchplatz had, however, already been set up as a museum and memorial to Luther.

Martin Luther’s final journey in January 1546 took him from Halle to the town of his birth, where he went to settle disputes between the counts of Mansfeld. Already marked by illness and exhaustion, Luther said a few days before his death: "I was born and baptised here in Eisleben and if it pleases God, I’ll die here as well!"

The exhibition in the house where Luther died is under the motto “Luther’s Final Journey”. It tells of the Reformer’s last trip to Eisleben and his final days spent there before his death. The historically furnished rooms are particularly impressive. For the first time since 1907, the bedroom and the room Luther died in can once again be experienced as intended by Friedrich Wilhelm Wanderer. The pall that covered Luther’s coffin is also on display.

April to October
Monday to Sunday 10am - 6pm

November to March
Tuesday to Sunday 10am - 5pm 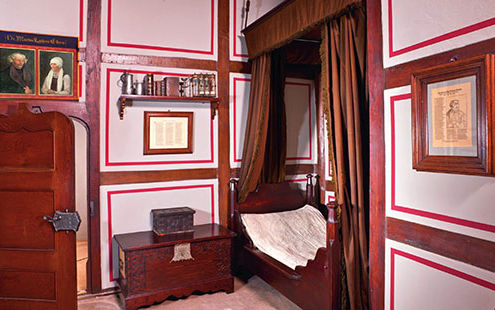 Looking into the bedroom in the house where Luther died

During the thirteenth century, the Cistercian convent of St. Mary was known as “The Crown of German Convents”, famed for the nuns’ academic education and Christian mysticism. After having been uninhabited for 457 years, a group of Cistercian sisters moved in on 13 August 1999 and founded a new convent.

Three women stood for the radiance and influence of the convent on thirteenth-century mysticism and literature. Gertrude the Great, Mechthild of Magdeburg and Mechthild of Hackeborn. Today, the convent is one of the stops on the Romanesque Road.

The extensive convent grounds invite visitors to linger and relax. The convent’s guest house is ideal for a short break, especially for those seeking a place of tranquillity and relaxation. The Education and Retreat Building offers the option of participating in courses and workshops. 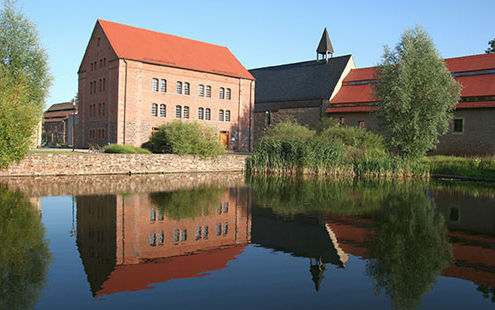 Permanent exhibition in the Liboriushaus

During his time as a district vicar of the Augustinian order, Luther also visited St. Anne's Church in Eisleben which was at that time part of an Augustinian hermit monastery. A special feature of St. Anne's Church is the "Eisleben stone picture Bible" which comprises 29 sandstone reliefs depicting pictures from the Old Testament.

The church is open for viewing and prayer, please ring the church office's bell (Annenkirchplatz 2) as well as after the Sunday service. 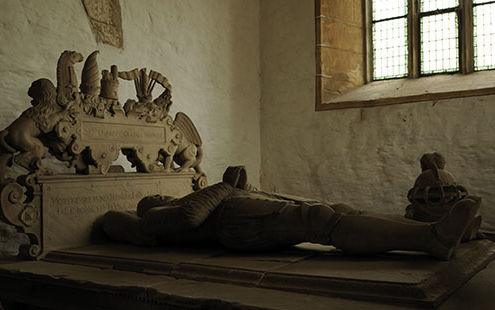 The towers of St. Andrew's Church characterise the Eisleben townscape. It is located above the market square and is at the heart of the Andreas Kirchplatz ensemble. The interior of the late Gothic hall church is characterised by exhibits from the 16th century. The altar shows the blessing of Mary by Christ who is surrounded by saints.

During his final stay in Eisleben, Martin Luther preached from the pulpit four times. He was laid out in the church after his death on 18 February 1546, and the first funeral sermons were held here. The preserving power of the Reformation is documented by the pulpit hanging, composed of precious priest's robes with raised embroidery on late medieval velvet.

The tombs of the Mansfeld counts put the history of the Reformation into context as well as inviting visitors to perceive the church as a place in which to personally and spiritually explore the topic of death.

April to October
Monday to Saturday 10am - 4pm
Sunday and public holidays 11.30am - 4pm 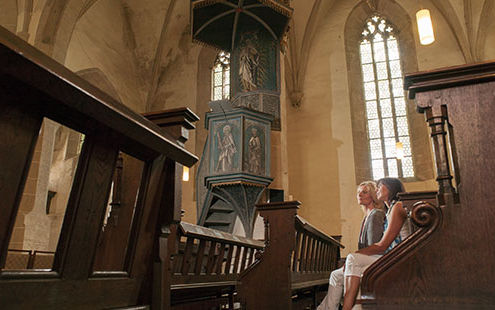